The village of Laxey is situated on the Eastern coast of the Isle of Man, eight miles to the North of Douglas, the Island's capital. The village name is of Scandinavian origin and translates to "Salmon River", from the abundance of salmon found in the river which flows down the slopes of the Island's only mountain, Snaefell, to the picturesque bay with its tiny harbour. 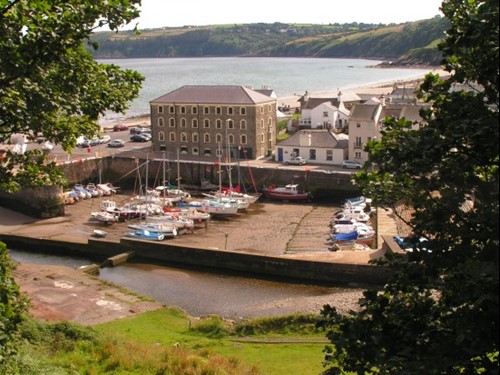 For very many years little more than a group of cottages surrounded the river mouth, this was to change with the discovery of rich deposits of lead, zinc and copper beneath Laxey's hills in about 1780. Within a few years, the effects of mining would change the village and landscape dramatically. Waterwheels, shafts and winding houses appeared on the hillsides and the washing floors and mine yard were constructed on the lower slopes of the valley. A huge pile of waste stone from the mine eventually towered over nearby houses. Roads and transport were improved and hundreds of new cottages and houses were constructed for the rapidly increasing population. Shops and businesses to serve this human influx were opened and new churches and schools were constructed in 1860 and in 1881 the Laxey Woollen Mills were opened; all are still in active operation today.

In common with many other areas of the Island, tourism became an important industry for the village; from the time of its construction in 1854 the Laxey Wheel had been a popular attraction. The Laxey Glen gardens were opened in 1875, with dance floors, bandstands, a croquet lawn, bowling green, bowling alley pavilion.

On 28th July 1894 the electric tramway was opened between Douglas and Laxey. A line to the summit of Snaefell followed in 1895 and the coast tramway was extended to Ramsey in 1898.

During the years immediately prior to World War One, it was common for several thousand visitors to travel on the electric tramway each day during the summer months. Fortunately, the popularity of the village as a tourist resort offset the closure of the Great Laxey Mine in 1929.

Laxey still retains a village and community atmosphere which is unrivalled anywhere else on the Island. Unspoilt natural beauty and unique attractions ensure that the village continues to be a popular destination for visitors, as well as remaining a very special place to live. Where else could you travel on the oldest electric tram in the world, travel on an electric tram line to the summit of a mountain, climb to the top platform of the largest waterwheel in the world and enjoy such spectacular scenery, all within a small village?