The original Great Laxey Mine locomotives Ant and Bee were built by Stephen Lewin of Poole, Dorset and were delivered to Laxey in April 1877. 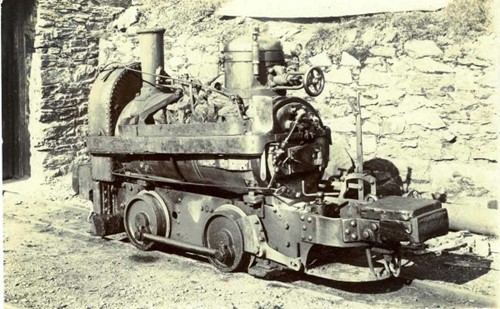 Given builders numbers 684 and 685, Ant and Bee were of necessity built to limited dimensions to operate in the confined space of the underground mine workings.  Their total cost was £590. Each had four solid Vickers Steel Company wheels, weighed just over two tons and had twin inside cylinders of four-inch diameter and six-inch stroke driving the rear axles.  They were 8 ft 7 inches long; 2 ft 6 in wide and 4 ft 9 inches to the top of the chimney.  The launch type boiler had a working pressure of 120psi.  The regulator was operated by a lever, soon replaced by a small wheel. A small screw handle operated wooden brake blocks which acted on the rear wheels only. The footplate was literally that and had just enough space for the driver's feet.   A small seat was provided on the rear of the frame as the driver had to remain seated once inside the mine.  Experience quickly showed that once sitting, the driver's knees were too close to the fire box and the frame and seat were extended; a similar extension was quickly found to be necessary on the replica engines! 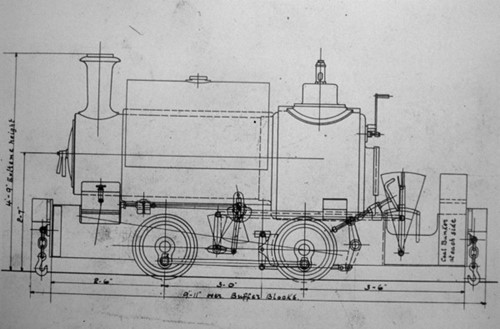 Perhaps the most unusual feature was the semi-circular-topped water tank which was mounted on the front frame directly in front of the smoke box and held in place by a small bracket on either side of the smoke box.  There has been some conjecture that these were not original features as the builder's photographs show the engines without the water tanks in place, although the mounting brackets and pipework are in evidence. However, the recent discovery of some of the mining company's account books shows that the tanks were supplied with the engines. Shortly after delivery, it was found necessary to add extra support to the water tanks in the form of a large strap fitted longitudinally around the tank and boiler, the two ends being keyed together on the firebox back plate.   The two straps quickly found a further use as a convenient place to store coal as the engines had no coal bunker. The addition of the straps required some alteration to the position of the injectors and associated pipe work.

By 1905, the condition of both engines had badly deteriorated through intensive use and required a complete refurbishment. New boilers were supplied by W G Bagnall Ltd and at the same time, Bee received a new chimney which one writer noted: "would have put the engine quite at home alongside any Crewe product". 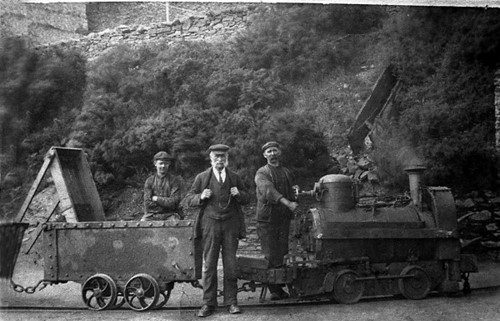 A typical train consisted of the engine and six ore wagons which it would seem were built by the mines workshop, all being to an identical design. Each wagon consisted of an underframe with four spoked wheels and a tapered body, made from sheets of iron.  The bodies were hinged around one axle on the underframe and rested on the other axle on two small supports.  The underframe was offset towards one end so that the entire body, with its contents, could be fairly easily lifted and the contents tipped out through a hinged door at the other end of the truck.

Each train had a crew of two; the driver and a "lad" who typically was about 14 years old. He would ride on the last truck and shunt the wagons underground at the shafts and at the surface on the washing floors. Here, the ore was tipped through a trap door between the tracks and down into the "teams" or storage bunkers.  The position of engine driver was a highly sought one amongst the mines workforce; despite the unpleasant working conditions, it was a much easier job than that of the miners. The train crews were held in high esteem by Laxey children who were often allowed to ride in the empty trucks back to the mine entrance.  A number of the original ore wagons were discovered underground by the Manx Mines Research Group in the early 1970s and were raised to the surface. Two are now on display in the Folk life Gallery at the Manx Museum in Douglas and a third is on display in the rear garden of Mines House, near to the terminus of the mine railway.