Restoration of the Railway 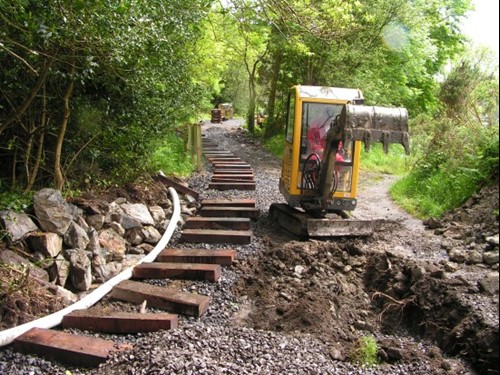 Restoration of part of the former mine tramway was proposed by the Laxey and Lonan Heritage Trust in May 1998, as a project to celebrate the new millennium.

Restoration would not be easy as almost nothing remained of the old tramway; the engines had been scrapped; the rails had been removed and the track bed was buried under rubble and vegetation; the engine shed had been demolished and the tunnel was blocked, at one end by a roof fall and at the Valley Gardens by an electricity transformer which had been installed there many years earlier. All that remained were the six ore wagons rescued from underground in the early 1970s and a few old photographs.  Any restoration work was therefore limited to the reconstruction of the tramway layout and Engine Shed at the Valley Gardens.

However, as fund raising began the initial proposal was to quickly gather momentum, assisted by two significant developments, the removal of the electricity transformer in August 1999 and the offer of funding by an accountant acting on behalf of a local resident Lieut. Col Randolph S C Glen.  With the transformer removed, the recreation of the tramway through the tunnel to the mine entrance was now possible and with the promise of significant funding, the construction of a replica of one of the original steam engines was proposed. 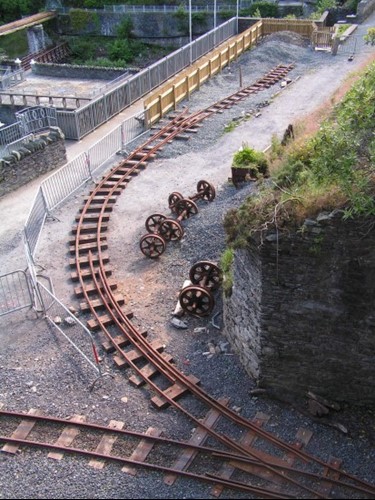 Work started in May 2000 with the clearance of bushes and trees at the Valley Gardens. With the assistance of the Laxey Mines Research Group, the tunnel was cleared and a survey of the route of the line towards the adit level was undertaken. Unfortunately, during construction of a housing estate in the area in the early 1970s, soil and rubble from the site clearance had been dumped on the trackbed.  Clearance work continued throughout 2000 and by September 2001, the tunnel collapse had been repaired, a new retaining wall at the rear of Glen Mooar Estate had been constructed and, with the assistance of volunteers from the Groudle Glen Railway, new track had been laid along half of the length of the trackbed. It was decided to retain the now unique (in the British Isles at least) gauge of 19 inches.

Sadly, Lt Col Glenn had passed away, but the offer of funding was honoured by the trustees of his estate. This enabled, in May 2001, the placing of an order with Great Northern Steam Ltd for a replica of Ant. With the promise of further funding a few months later from the same source, an order was placed for a replica of Bee. A new engine shed was built on the exact footprint of the old shed and an order was placed with Alan Keefe Ltd of Ross on Wye for a small carriage.

Ant was delivered to the railway in April 2004, the new carriage in July 2004 and Bee during August.  Several demonstration runs of ore trains had already been operated and passenger trains began in September, operating every Saturday until the end of the month. The formal opening of the Great Laxey Mine Railway, as it was now known, took place on Saturday 25th September as part of the 150th anniversary celebrations for the Laxey Wheel. The opening ceremony was performed by the Hon Steve Rodan MHK, Chairman of the Laxey and Lonan Heritage Trust. 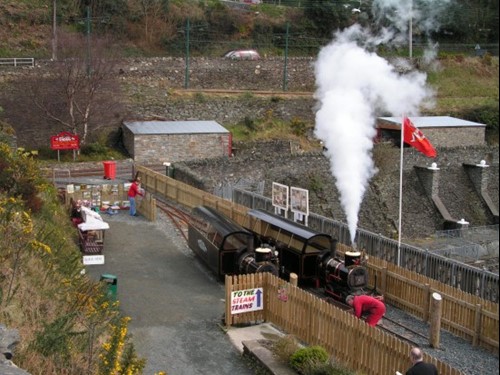 With a number of regular volunteers now working on the railway, a programme of further development was begun. The line was extended to the Mines Yard in 2005 and a mining trail to the former mine entrance was opened at the start of the 2006 season.  With the further clearance of trees in early 2006 at the Valley Gardens, the reconstruction of a new station area was possible; this replicated the old track layout and involved the construction of an extremely tight radius curve from the tunnel mouth to the new station. Construction of a carriage shed began in October 2006 and a second carriage was delivered from Alan Keefe Ltd, in August 2007.

The two steam locomotives were joined by a battery loco in May 2009.  Built by Clayton in 1973, the locomotive was refurbished and re-gauged by Alan Keef Ltd and named Wasp.

Unfortunately, the operation of the steam engines has not been without problem. Ant was rebuilt by Alan Keef Ltd in 2007 and Bee was rebuilt locally in 2008. Both received new boilers in 2011.