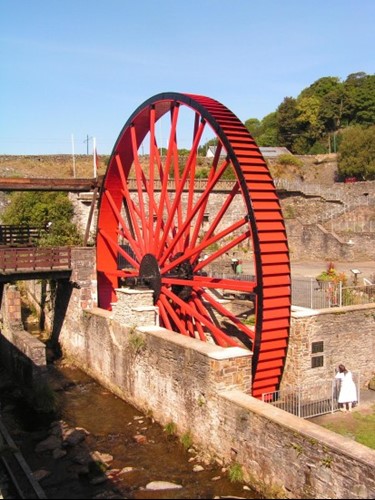 In 2003, the Laxey Mines Research Group began an ambitious project to rebuild the former Snaefell Mine Waterwheel on the Valley Gardens at Laxey.

The Snaefell Mine was situated at the head of the Laxey Valley and was the most successful of a number of small mines in the Laxey area. Sadly, the mine was to earn its place in Manx history in May 1897 as the scene of the Island's worse mining disaster. An underground fire had filled the mine with carbon monoxide gas and twenty miners died when they unknowingly descended the shaft into the deadly but odourless gas.

A fifty feet diameter waterwheel was built in 1865 by Leigh and Gilbert Howell of the Hawarden Iron Works in Bagillt, to pump water from the mine.  When Snaefell mine closed in 1908, the waterwheel was dismantled and rebuilt at Blisland in Cornwall to pump slurry from a china clay pit.  The waterwheel fell into disuse in the 1950s and in 1971 was acquired by the Cornish Wheel Preservation Society who dismantled and put the components into storage.  The Preservation Society later merged with the Trevithick Society and the water wheel was loaned to the Llywernog Mining Museum in Wales.  On 15th March 2003, the Trevithick Society agreed that the components could be moved to the Isle of Man for re-assembly and restoration.  On Sunday 21st September 2003 the Snaefell Waterwheel arrived on the Isle of Man for the second time!

The Laxey and Lonan Heritage Trust agreed to act as a management and fund raising body for the Laxey Mines Research Group whose volunteers carried out the restoration work. 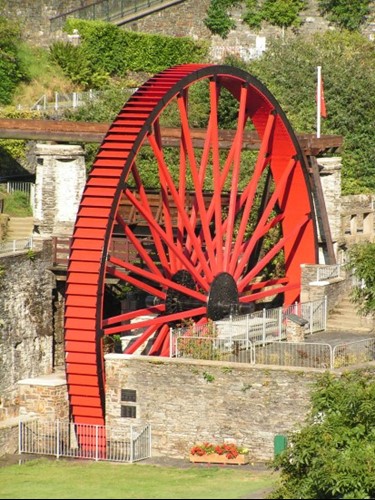 Restoration of the waterwheel at the remote and almost inaccessible Snaefell Mine was not an option and it was agreed that the former Washing Floors at Laxey was an ideal location.  The stonework and pit of a 42 feet diameter waterwheel which had worked on the Washing Floors survived largely intact and investigations showed that with some modification, the slightly larger Snaefell Wheel could be reconstructed there.  The Valley Gardens are now owned by the Laxey Village Commissioners who were extremely supportive of the scheme and agreed to lease the wheel pit area to the Trust, as well as supporting the project in many other ways.

Volunteers spent many, many hours on Sundays and weekday evenings carrying out the restoration work over the next three years. On Sunday 20th August 2006 several thousand people came to Laxey to witness the formal "first turning" of the restored waterwheel which was christened "Lady Evelyn".

Following the restoration, the waterwheel was presented by the Trevithick Society to the Laxey and Lonan Heritage Trust who are now the formal owners.  Peter Geddes, the Project Leader, was later presented with an MBE in recognition of the success of the restoration project.

The project website is currently unavailable which gives full details of the restoration project and acknowledgment of the many supporters and sponsors. It is hoped to be able to resolve this soon.